Yesterday I posted the What is NetApp StorageGRID post and normally in true Simon Sinek fashion I would or maybe should have started with the Why… but 24 hours later here you go with the why.

As Duncan Moore would say this is the best kept secret at NetApp. It is as described before their Object Storage offering.

I first want to point out the obvious and something we hear in every vendor meeting or conference “business” breakout and that’s how about trends or about the challenge of data management.

We are the same at Veeam we have a lovely slide that outlines this, and I am not taking the mickey out of it as it is true, just funny how everyone has to continue to talk about it. In particular and from a technical point of view I see the Data Growth the interesting one to mention here. We have so many more different sources of data now than we did 2,3, 5 or even 10 years ago.

Ok so that’s the 10,000 ft view of the massive data challenges we have in the world in certain places. And don’t get me wrong I am having a number of these conversations on a weekly basis.

But the biggest issue is keeping things functioning at scale and keeping that performance, generally file services is just simply not scalable for these workloads.

Use cases for Object Storage

There is a broad selection of use cases for object storage, I would be remiss if I didn’t mention some of these but I am going to focus eventually on the one use case I am seeing many of our customers moving towards and that is leveraging object storage to tier their backups to reduce cost of their on-premises primary backup target storage.

If this is the first time you are reading about StorageGRID then Duncan Moore would be right in his comments I mentioned at the very beginning.

This is not a new Object Store. Back in 2010 NetApp acquired a company called Bycast StorageGRID. Bycast had the product from around 2000 which shows a level of maturity in the Object Store space. Also, since that acquisition and I think I remember being briefed on StorageGRID at our first NetApp A Team ETL event in 2013 / 2014 and being impressed but was thinking…. But what is going to use this scale of storage? I took the below shot from the Storage Field Day presentation that Duncan did back in 2017 so I am sure there is something newer by now but you can see there has been a fast and agile development track to StorageGRID. 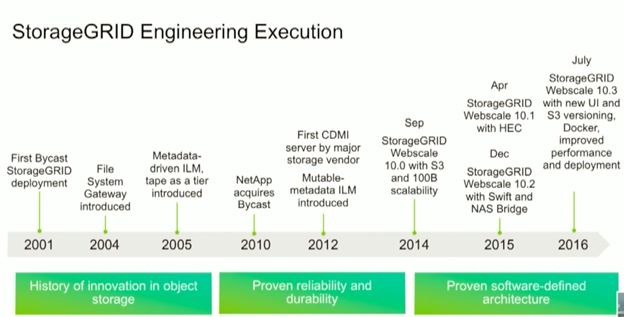 And the final thing that I want to mention on the Why NetApp StorageGRID is the interaction this offering has with the rest of the NetApp Data Fabric.

Let’s quickly just remember the What is NetApp StorageGRID post and the software defined approach, the scale out architecture, Geo-Redundant and policy based management. But now look at how the NetApp Data Fabric ecosystem can leverage StorageGRID.

The FabricPool licensed feature that is available on the NetApp ONTAP systems on-premises. This feature allows the customer to tier cold snapshots from this on premises, or cold blocks to an object store this could be Amazon S3 or Microsoft Blob but it could also be to NetApp StorageGRID, if using StorageGRID only then there is no need to license the feature.

There is also the concept of a NAS bridge which is another feature capable of allowing NFS and CIFS files to objects, I will try and touch more on this in a later post.

Next up I am going to get further into the architecture here and then into the Veeam Cloud Tier.