‪Why do we need PaaS and IaaS storage in the public cloud? 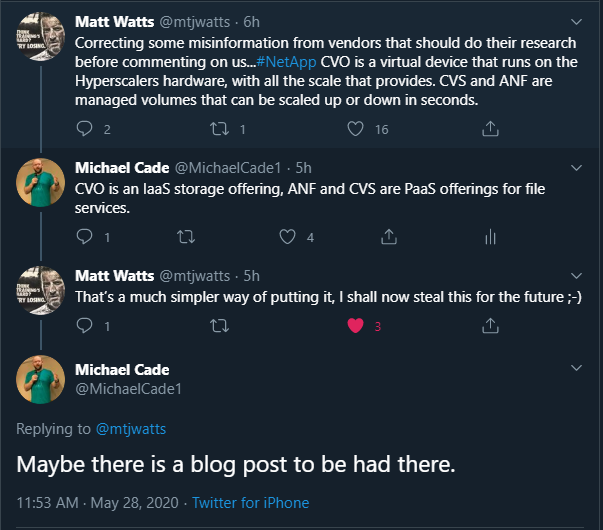 And here we are!

NetApp in particular have offerings in both PaaS and IaaS for offering storage services out to their customers, they have Cloud Volumes ONTAP which gives the customer the ability to manage an IaaS approach to Cloud Storage, this is available in the 3 major public cloud offerings (AWS, Microsoft Azure and GCP) This means the underlining infrastructure is managed but you are in complete control of the storage operating systems. There are many others out there that would offer a similar function.

When you need a description, who doesn’t head to google and then find the definition of what you were searching for on Wikipedia?

As we said in the opening statement Infrastructure as a Service (IaaS) is taking away the underlining hardware responsibility from the consumer whilst offering a VM or Instance to the consumer to do with that as they please, obviously as a cost but they can install what they want on that instance. They could choose their operating system, what applications they would like, they may also want to cluster that with additional instances etc but they manage this from the VM layer and up.

Let us summarise this even further

Why would you need IaaS storage?

Lets cast the time back to before the public cloud was such a dominator in our world when everyone ran their environments on their own virtualisation platform, compute, network and storage were all purchased on a CAPEX model and things were this way. The concept of a virtual storage array was a viable solution to provide customers with the access of a rich storage system without the hardware spend and it could just run as a virtual machine within the same environment. However, at the time you likely had access and you had to manage the entire infrastructure so it might have been a cost factor driving you towards the use of a VSA rather than a technical reason.

Now in the world of the public cloud you do not have access to the infrastructure as you once did but you may want a little more than the native storage offerings offered by the cloud provider. Or you may have workloads on premises still and in other or multiple cloud platforms so a common storage operating system would or could give you the ability to move data between these different environments.

The final bullet point in the section above touched on Storage as a Service, customers access to their own storage services through a standard system interface protocols or an API. This could include bare-metal storage capacity; raw storage volumes; network file systems; storage objects; and storage applications that support file sharing. Whereas once this option was maybe deemed a cost saving exercise now many companies leverage this especially in the public clouds as it gives the customer more functionality at the storage level.

This is where NetApp have their Cloud Volumes ONTAP option which is available in Microsoft Azure, AWS and Google Cloud Platform.

And here it is the trusty Wikipedia description.

We previously touched on Infrastructure as a Service and how this covers Applications, Data, Runtimes, Middleware and the OS but you pay someone else to look after the virtualisation, servers, physical storage and networking. PaaS only concentrates on the Data and the Applications whilst leaving the rest to someone you pay to manage it.

Why would you need PaaS storage?

Ever been or are today a SQL DBA? What if I told you, you could go to Microsoft Azure and other public clouds and you could easily spin up your SQL instance but without having to worry about the operating system and all of the other “bloatware” and management of your SQL environment. The environment underneath would follow best practices, but it also wouldn’t require that timely adventure of getting the infrastructure operations team to deploy you a new Windows server and patch and and and.

Because of the lack of control of everything under the Data and Applications it means things can be a lot more secure but also deliver faster applications to your teams or customers.

So why PaaS storage? Do you need a subset of capabilities that the IaaS storage can provide, for example SMB or NFS to specific applications that may or may not be running as PaaS or IaaS, Oracle a good example that could consume storage and benefit from this over using maybe the public clouds own storage offerings. This is where NetApp have their Azure NetApp Files in Microsoft Azure and they have Cloud Volumes Service in both AWS and Google Cloud Platform.

I have mentioned some of the offerings from NetApp but there are a number of other vendors offering similar and different IaaS and PaaS storage offerings out there, I think its also important to add that this is not an absolute requirement, there are native storage offerings from the public clouds that may absolutely fit the need you require for your data and applications because it’s also important to remember that running these storage systems or services in the cloud also cost money especially the IaaS route you will pay for the benefit of having a rich storage system but you will also have to pay for the compute and networking used here.

This looks to be a really good playlist of NetApp Services and Software Storage offerings for the Cloud another shout out to Nick Howell here as he is putting some great content out about this space.