It feels like this project has been bubbling away for around 6 months, so it is great to be able to share the progress as we are getting close to the completing the project.

First of all, up till this project I have been a massive Apple fanboy for probably the last 5-8 years, I have a 13″ MacBook Pro for the road and a 27″ Apple iMac for home use.

These are getting old and I have been thinking about a tech refresh for the last at least 12 months.

The first look was to see what a tech refresh would be replacing like for like with Apple. 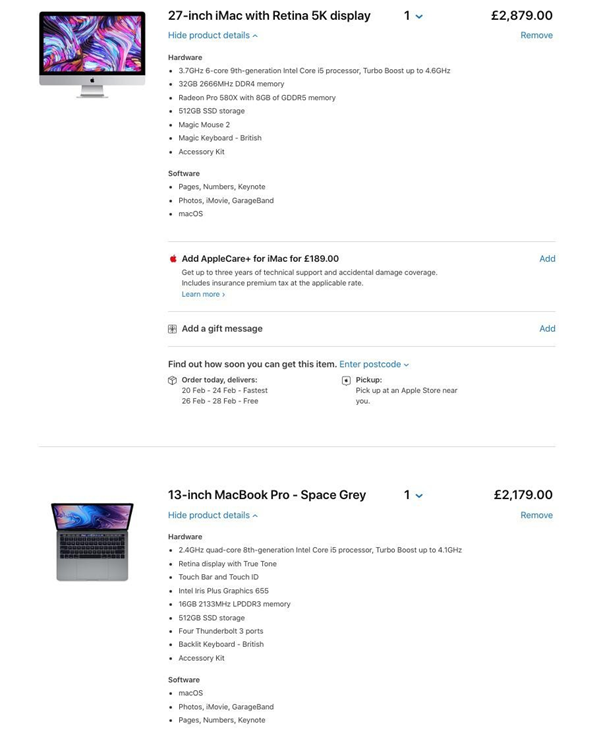 That price tag of £5058.00 that made my eyes water and #ProjectFreddie was born. To cut a long story short I wanted a refresh, but I did not want to spend that much money or at least that much money on two devices and have no additional peripherals. You then have to have that chat with yourself about what is it that is keeping you to stay with Apple and MacOS, for the record I am also an iPhone and iPad user as well. Commonly the answer just is “Well it’s about the ecosystem!” but I pulled this apart and I used Microsoft OneDrive for file sharing between my devices, I use Microsoft PowerPoint and Word quite a bit, I use Camtasia and SnagIT daily for video editing and I have also recently been using OBS to create more video content. Oh, and I also use the VMware Horizon Client to log into our lab. So let’s take that £5k budget and see what we can do with it.

Everyone loves a good project name. Well the story behind this one was the laptop I am looking at, but I have still not confirmed or purchased this model yet, but it is the Razer Blade Stealth 13″ in Mercury White. So…. Mercury…. Freddie… yep, “Freddie Mercury” It doesn’t sound as good now in writing, but it stuck.

The project though grew from not just the kit list for a new laptop and desktop machine but it also consists of a full new purchase of an audio and broadcaster setup, for my role I do a lot of podcasts, customer calls and webinars so you need to make sure you have really good audio kit, the details will be below in the kit list.

Because of my switch away from Apple and the “Ecosystem” I also needed to look at a new screen. The current two ASUS VP278H will be used somewhere I just don’t know yet. Maybe a station in my office where I can dock my new laptop when I make the decision on that.

Also, whilst this refresh is taking place it is a prime time to look at the office configuration and make some other aesthetic changes to better suit my working style when at home and not on the road.

Ok so I shared a little snippet video of a massive pile of kit that I have been collecting over the last few weeks and it got a lot of attention asking for the kit list.

I have spent a long time running through reviews on YouTube for these projects. The other thing to note is that I am not a gamer, but you are going to see a lot of gaming hardware listed. Why? Well gaming hardware takes a beating and withstands it I want that same level of durability as I spend a lot of time at my workstations, I need to make sure things are solid and I want and need that longevity.

Now this is the one thing I am still waiting for, I waited the longest here to make this decision and because of the situation in the world right now it meant I could not get the bigger Samsung 970 as they didn’t have this in stock because of supply chain issues.

Although this is a custom build in a way it is being built and delivered by Overclockers UK these guys have been around for the best part of 20 years and in fact they were also my go to probably 10 years ago when I last built a rig.

A big part of this project was about longevity, it’s going to be easy to expand on the storage here as well as actually some of the other options for components but storage and also memory this board actually can go up to 64GB so that is another easy upgrade for later on down the line.

Ok to finish this Desktop build off I also went with the following hardware. A lot of research has gone into this purchase, endless amounts of YouTube reviews have been watched, as well as a lot of hands on personal preference. You spend a lot of time when working from home using these things so they have to be right.

Ok we are still going, this section is to mention is the audio and broadcaster section, I spend a lot of my time on calls with customers, partners, webinars and also a lot of time creating content either via video demos or recorded calls.

As you can see a massive endorsement for Razer but I have chosen based on numerous YouTube reviews and personal preference.

One more section and this is still up for some more research, I am pretty sold on the Razer Blade Stealth 13″ I am just not sure on the Mercury White option now, the issue I have with the black is it seems from watching reviews that it collects fingerprints like nothing else! But the thing swaying me towards the black and better spec models is the 4k model (do you really need 4k on a 13″ laptop screen?) but also its touch screen and more storage to start with.

My road setup is likely going to look something like

I am not going to rush into the laptop purchase just yet as we are grounded for the foreseeable and want to make sure I make the right decision on that front.

We are about 10 days away from the desktop delivery but everything else is here and waiting.

I also mentioned about making some aesthetic changes to the office as well, this was a simple atlas decal and a lot of people mentioned this on twitter, just search on amazon for atlas decal and you will see lots of different variations available.

Let me know what you think, any questions about the build, I am going to try and document and maybe even try and record a mini vlog type thing to show off the massive haul of purchases and setup here. All this though is still going to come in around that same cost point that it would have if I just hit the buy now button on the Apple site and I think I am getting so much more for my money, and if I don’t get on with Windows then I can just get Linux on and be done with it.

Ping me on twitter if you have any questions or below.