For those that stuck around and watched some of the YouTube videos on the home office setup and read the specs and the story so far. Then we are now almost a month in, and I wanted to share some of the thoughts on the kit I chose and give you the lowdown on how its working out so far.

Over the last few months we spoke about the fact I was working on a project to refresh my office setup, little did I know that the world would go into lockdown and everyone would be searching high and low for components to make their working from home better and more efficient. Here is that kit list and why I was looking to do this project and that flip from Apple to Windows.

Then we have the desk build out here. 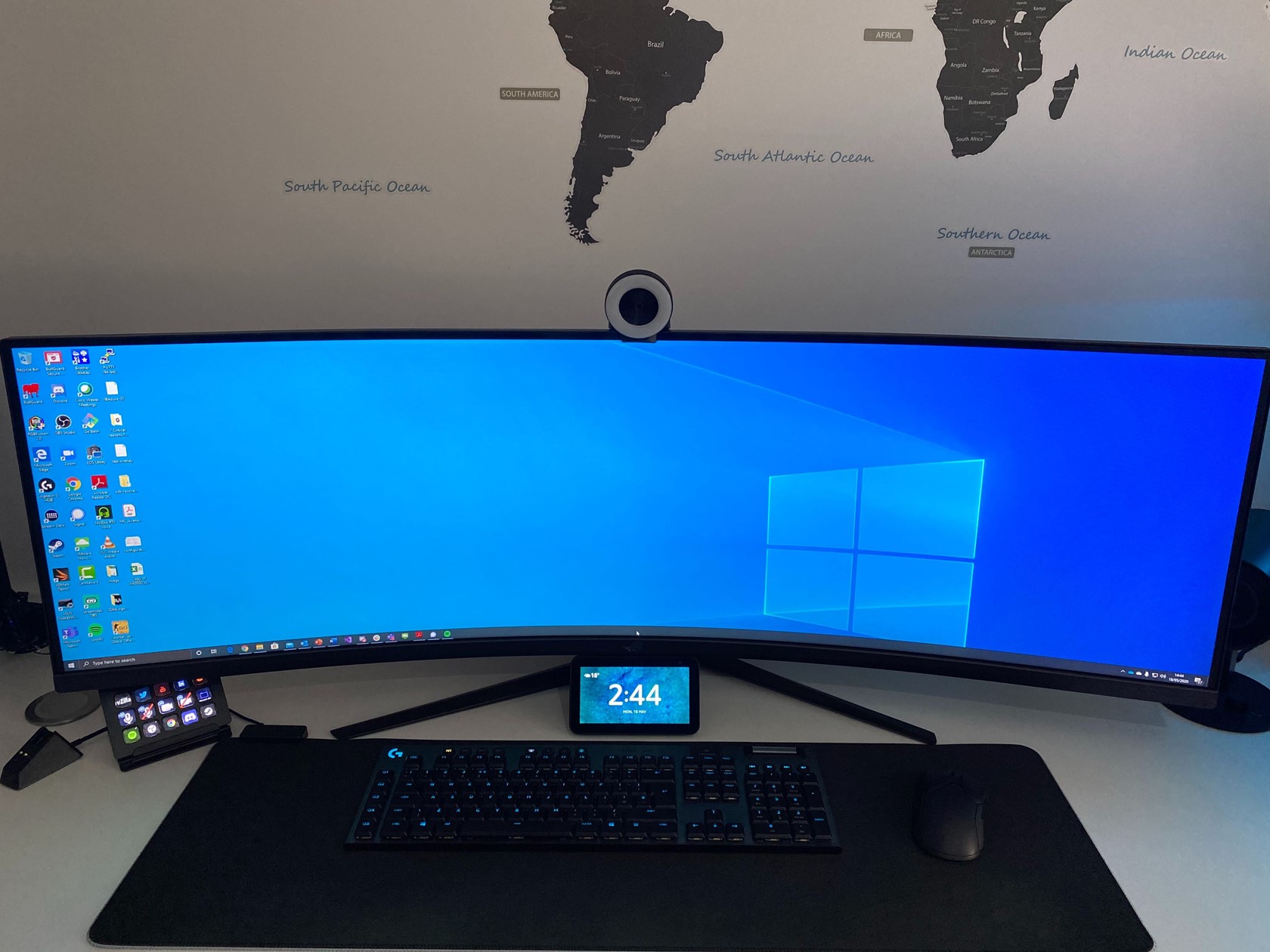 The ASUS ROG Strix XG49VQ Super Ultra-Wide HDR was a great choice, after a month in I can safely say I made the right decision, interesting that a lot of people have asked “how is it?” “do you overextend your neck?” well the answer is no I am over 30cm away from it which is what I read to be the recommended. And to be honest it’s the same width as the setup I had before with 2 x 27″ but the best thing is I don’t have to deal with the bezels in the middle its just one big screen and its great from a productivity point of view as well as a little bit of CS:GO that I have been getting into. 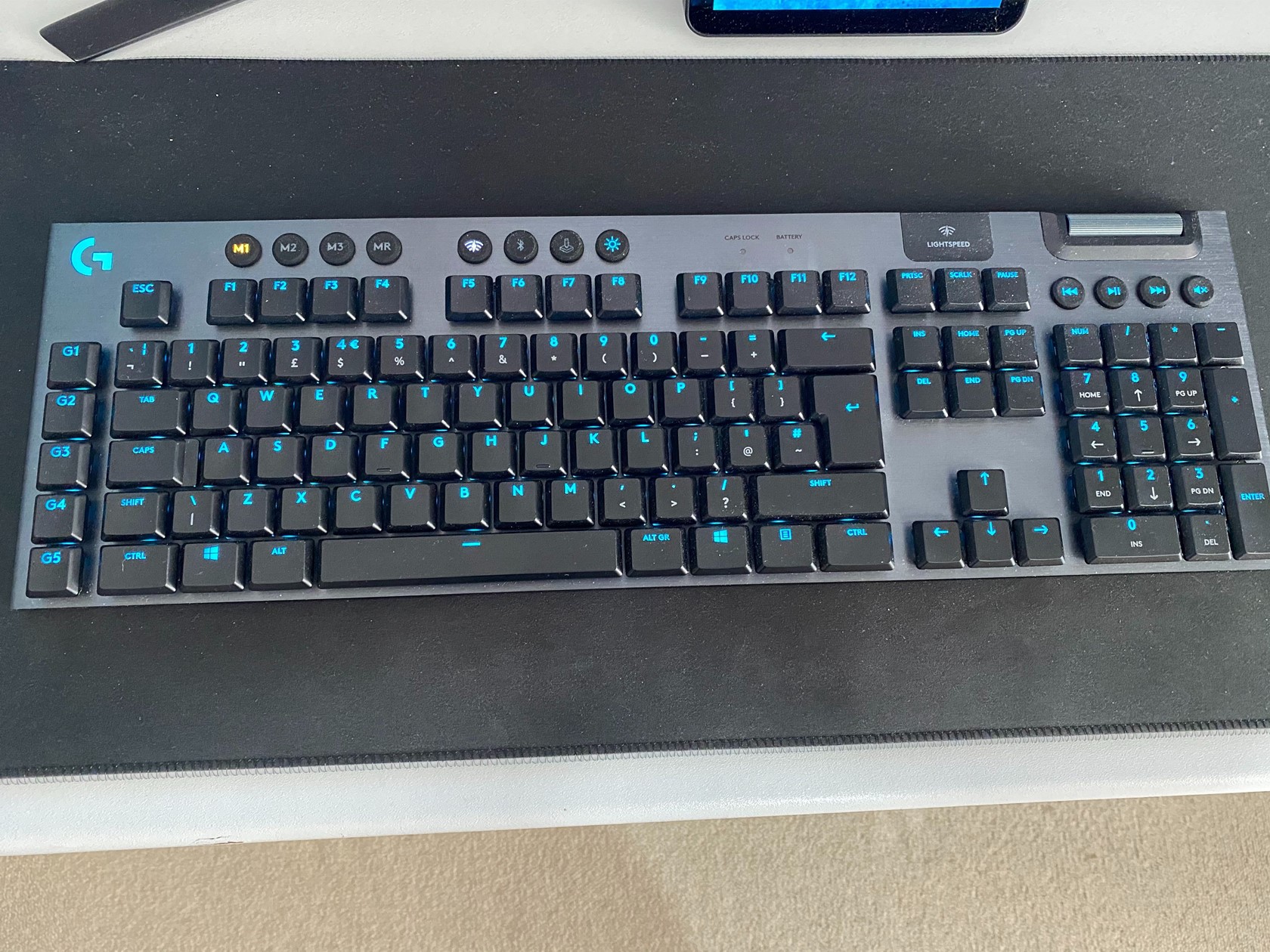 Another top performer here has been the Logitech G915 coming from an Apple keyboard I was a little concerned how moving to a mechanical keyboard would be, but this has been amazing! The clicky sounds and feel when typing has been awesome. I would recommend this to anyone that is looking for a solid mechanical keyboard for productivity workloads. On another note I went for the Razer Blackwidow Lite for my laptop station, more to come on that when I get it out the box. 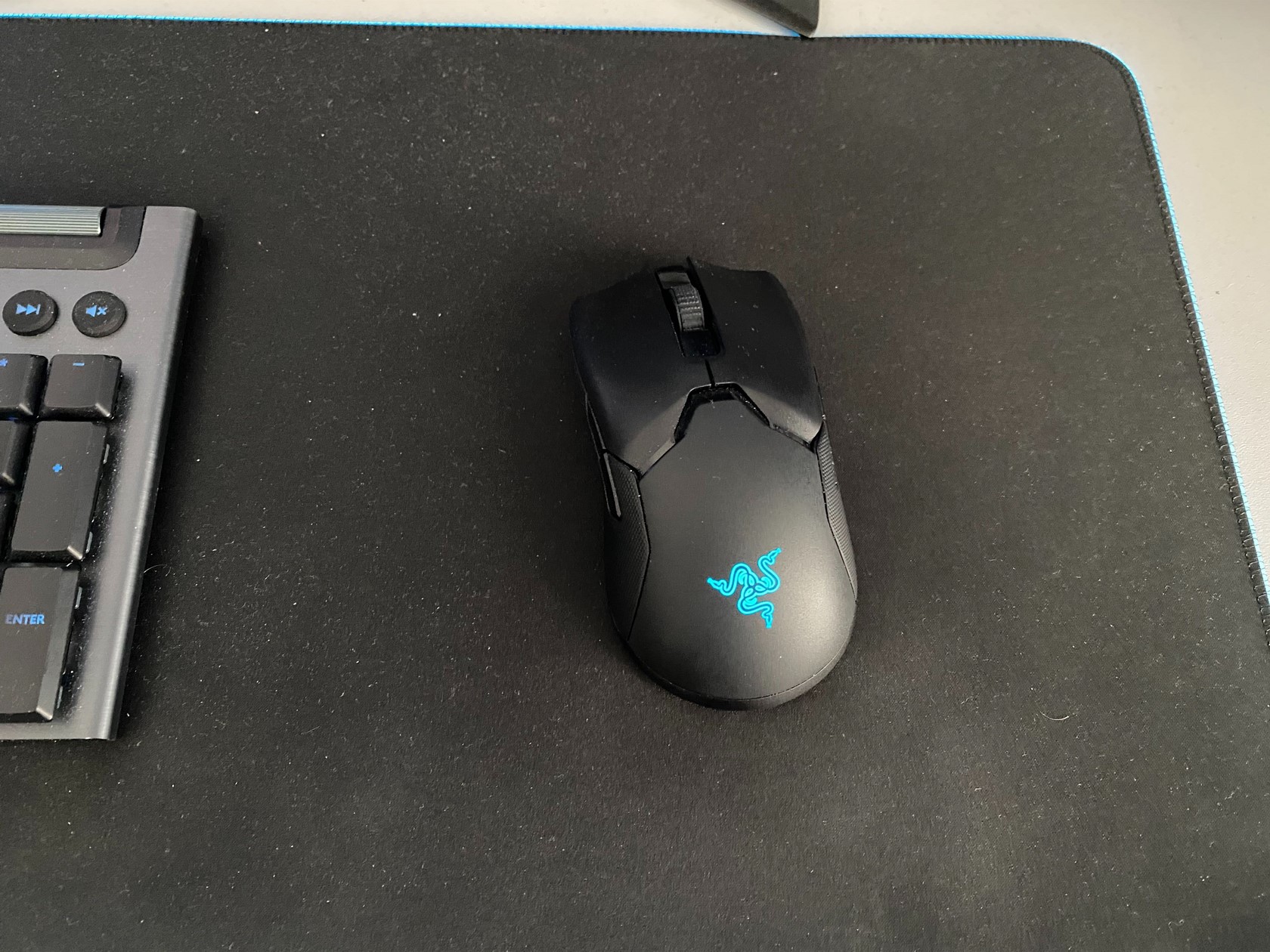 The Razer Viper Ultimate got some amazing reviews and rightly so for the cost! Again, coming from a mac magic mouse to this is a completely different feel but I have been pleasantly surprised. I love the wireless and the charging dock set off to one side of the desk, this needs to be docked probably once a week. 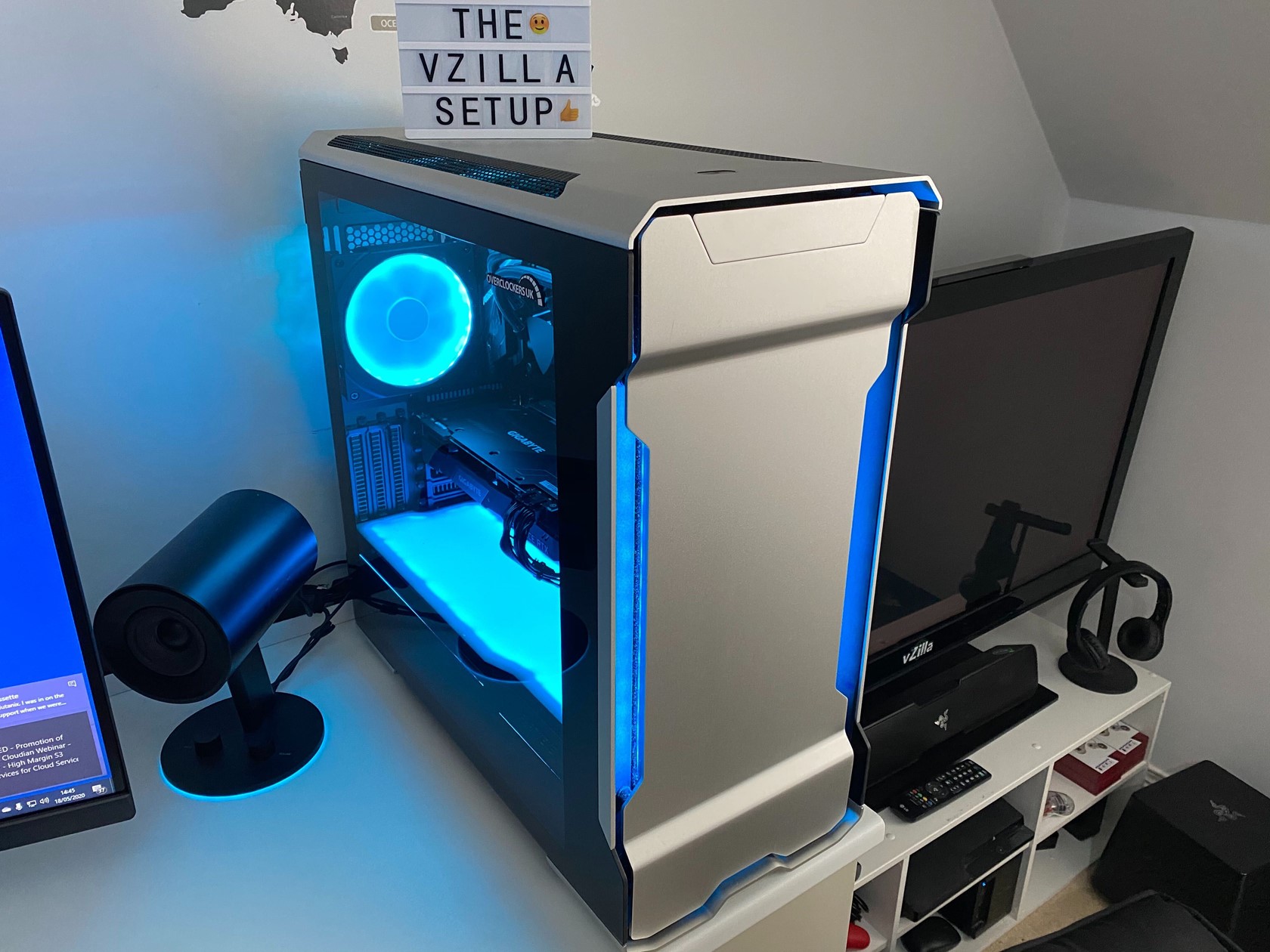 By far the most expensive and you can see from the spec on the previous blogs what I went for, I love the look of the Phankeks Enthoo Evolv X and by all accounts I thought moving from an iMac to a desktop PC especially where I was going to have it situated on the desk I thought it would be a lot noisier but its not at all, maybe it ramps up a little bit when I am exporting videos but nothing serious. Overall, this was a great choice, maybe the only thing I might have changed was going for a darker colour. 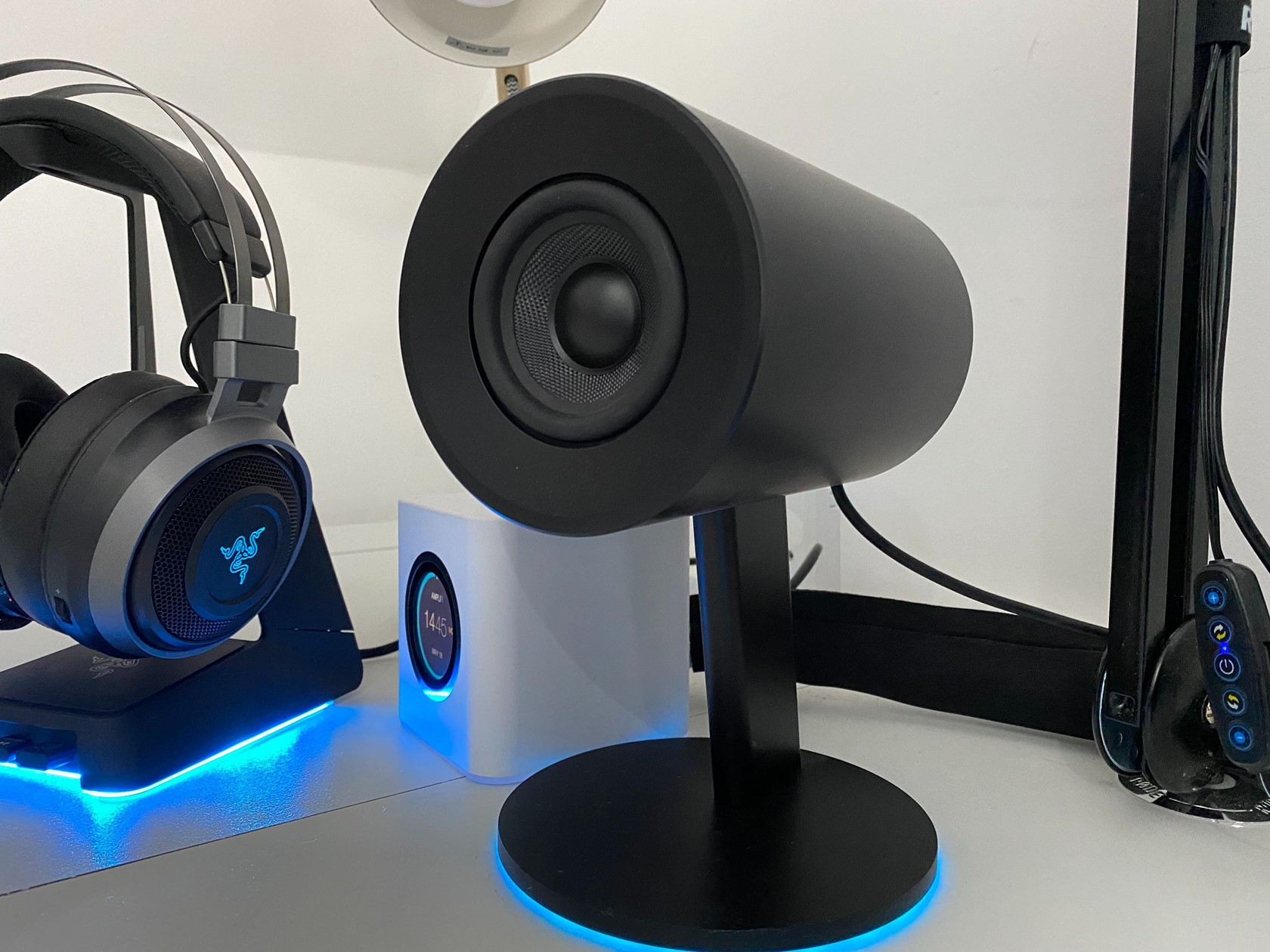 I think I said somewhere that the reason I put speakers into the setup was for consuming content, a lot of the training and also general content I have been consuming have been more video based rather than reading, if its not video then its likely music or podcasts. And the Razer Nommo Chroma speakers looked good and they got some really good reviews out there as well. 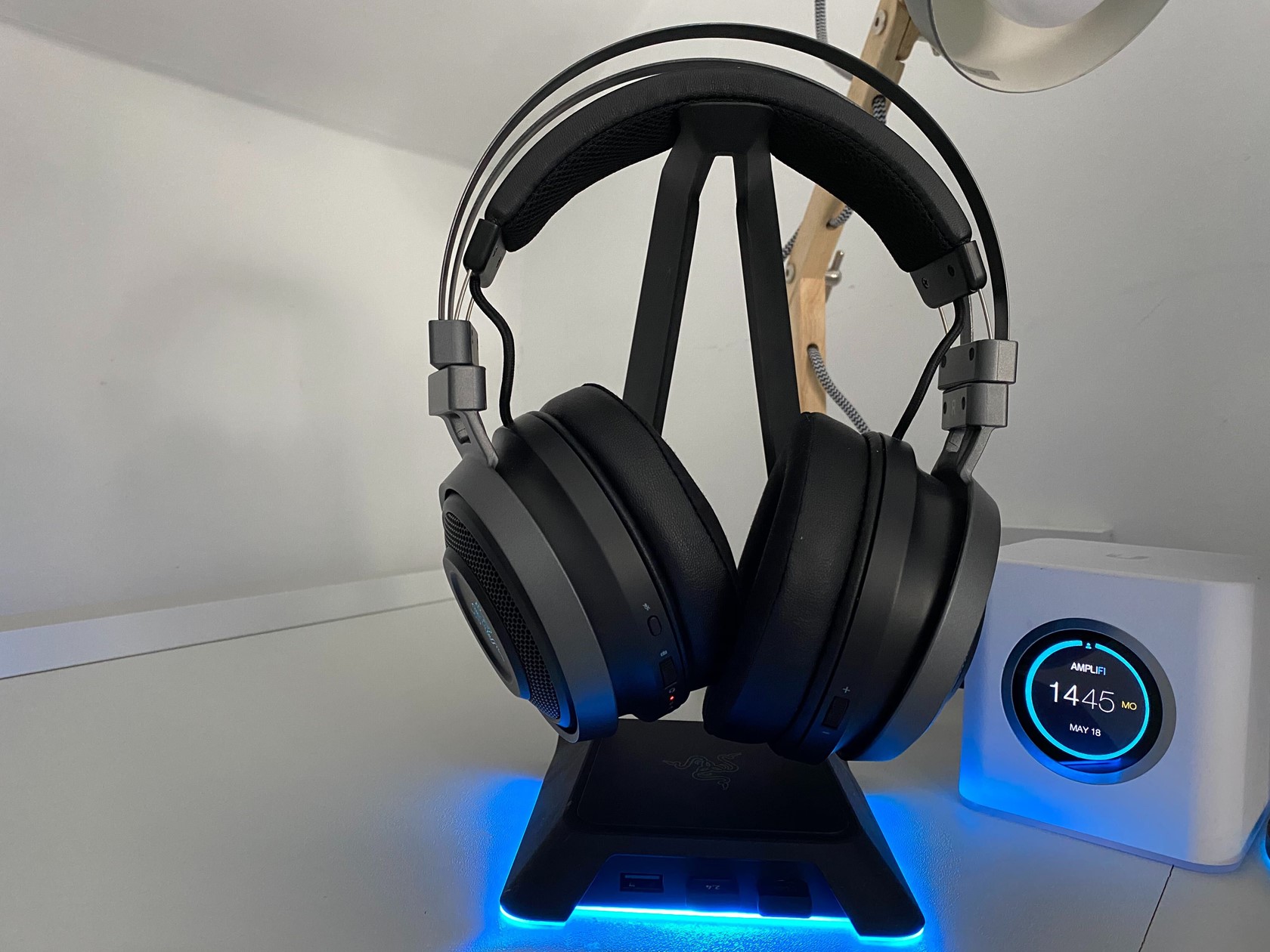 The other half of sound for me is being on conference calls or webinars. For that I wanted a good comfortable pair of wireless headphones, the Razer Nari Ultimate got some good reviews and they fit with the rest of the Razer investment. Honestly I think the ultimate are probably aimed at some serious gamers for the price and some of the features, If I was going to do it again then I would likely look at either of the other offerings they have. This might be the route I take for my travel kit and go for the essentials maybe. But overall, they have been great for the calls I am on more and more these days. I am finding that the battery life is not that amazing and it wont last a full day of calls without needing some charge. 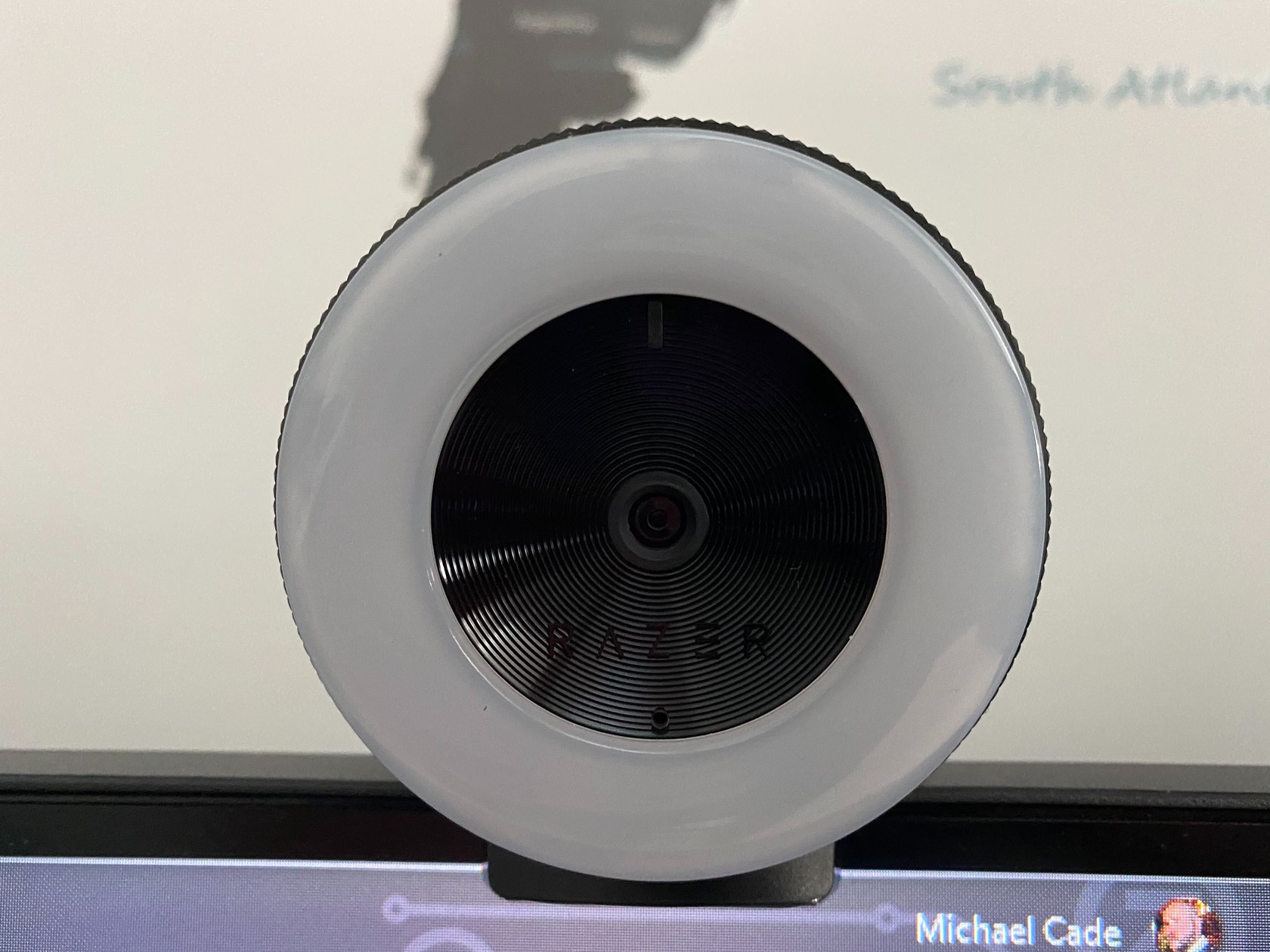 Again, I was lucky that all of this kit was ordered and almost delivered before the pandemic struck which meant everyone in the UK and globally were sourcing better webcams and audio equipment as they started the working from home journey. For the webcam I went for the Razer Kiyo. Some good reviews and also, I seemed to have dropped into a Razer bubble of kit I was choosing but overall its been great and with the normal business calls its really good especially in my office where things are quite dark. 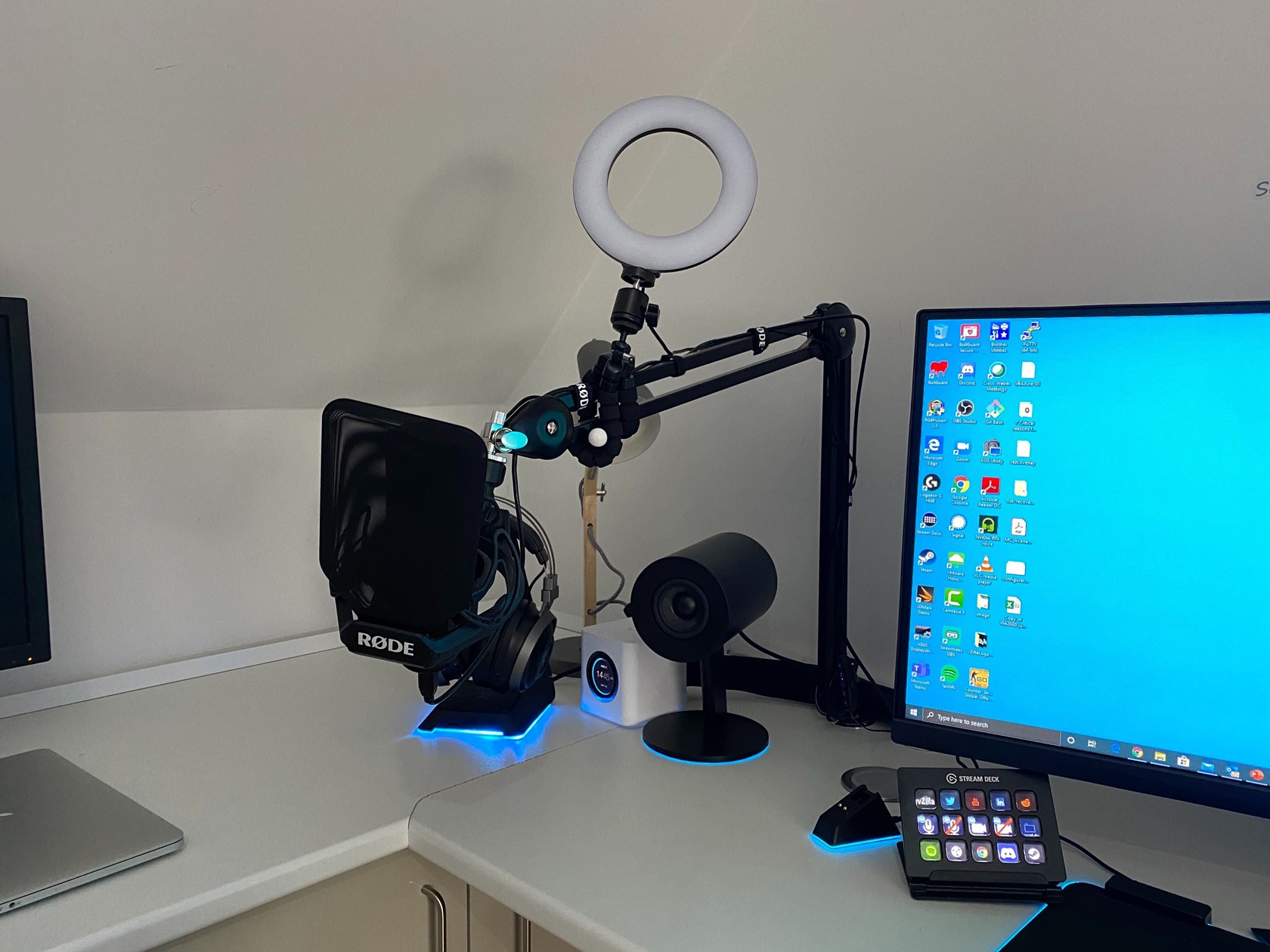 Another big part of the setup was the audio and by this I mean the input, I did some research but probably not as much as I should have here, I think if I was going to go with another shot at this it would have been to get an XLR microphone over the USB one that I did but again I think I probably went for the best or one of them at least USB microphone options. I went with the Rode NT-USB with the SMR shock mount and boom arm. No complaints here I have been on many calls, podcasts, YouTube videos and demos and all of which the sound has been quite good. Anything wrong with the settings is an issue my end. Couple this with the Nvidia RTX voice plugin and it’s been amazing, I also bought an air conditioner for the officer and this plug in cancels that out somehow… some dark magic. 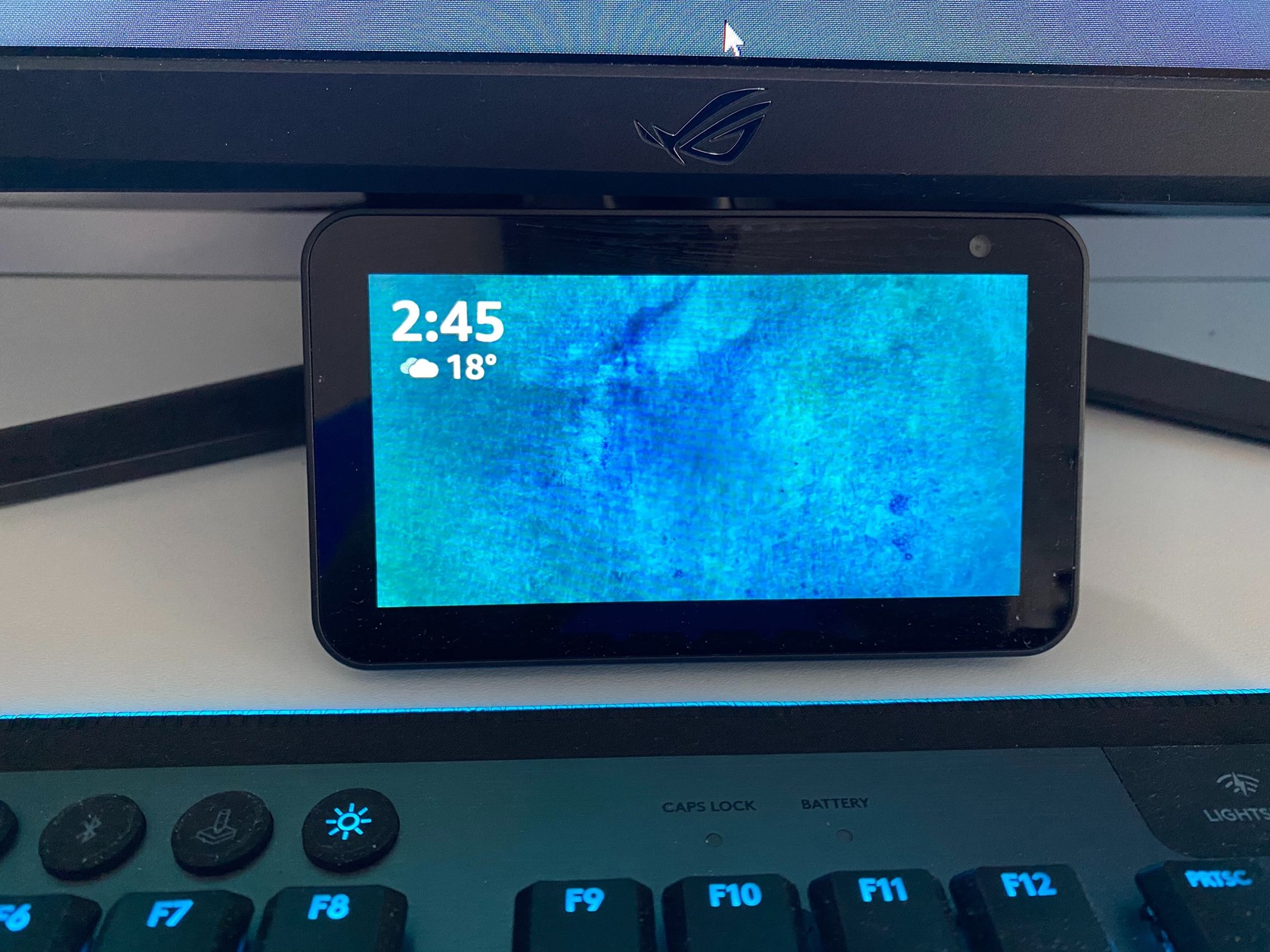 I could go on for another 1000 words on other things that have been purchased around cable management and other little things I have got to make my life easier or better for working from home. I also got a lot of comments and questions about the Elgato Stream Deck that I won in an online competition, I am currently using this for day to day macros and also playing with it to work better with StreamLabs OBS. The other thing is the screen under my new monitor, this is the Amazon Echo Show 5″ and I saw this on some setup reviews and thought that it looked good and it integrates with everything like Office 365 and tells me when things are due or upcoming in my calendar. Really cool stuff and cheap! 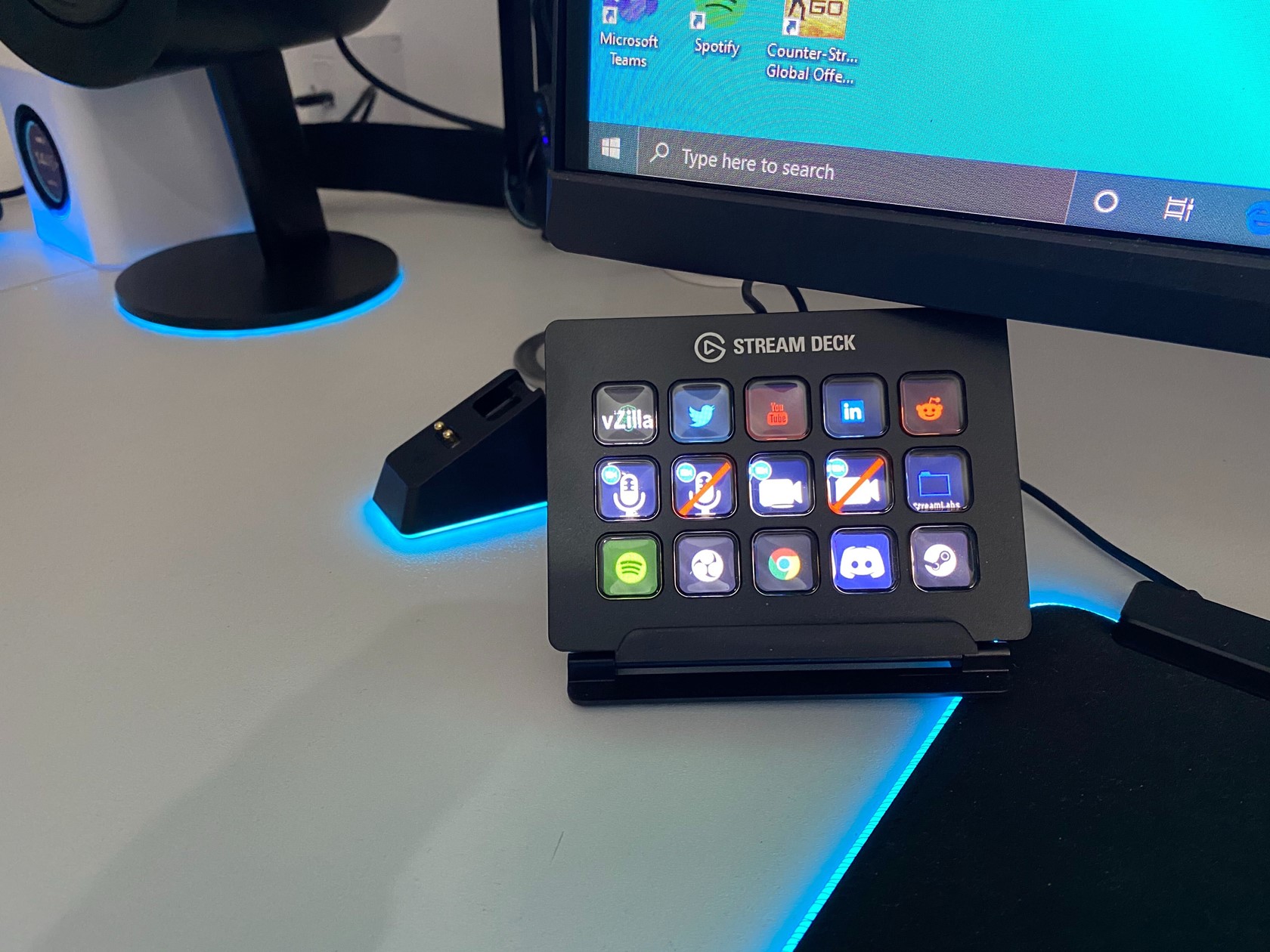 What is next, what is next, well the original plan got flipped over with this COVID19 situation, because I was going with the laptop first then desktop but turns out I don’t need a laptop likely I don’t need one for the rest of the year as I cannot see us doing much travelling at all. But the Razer Blade Stealth 13″ 2020 edition just got released and I am keeping my eye on this, I am really considering the 4K model not for the 4K on a 13″ will be super but its touch screen where as the 1080p HD version is not. There are some other things as well… I just need to make the decision and pull the trigger when it makes sense.