The usual last blog of the year, highlighting things that have happened, travel, website and twitter stuff. I really do this to highlight to myself how things looked when I get to this point next year and we see some progression in some or all areas. If anyone else finds it interesting, then great stuff.

I also tend to write some sort of predictions for the year ahead in another post, but I did one at the beginning of this year. This is something I try and keep top of mind throughout the year so that I am achieving my goals.

The opening part of the post was about the travel and I am going to do some comparison between 2017 and 2018 later in this post. But I was right it did reduce a little. A big mention for the IT community as well and that did not disappoint this year. To be involved in so many community programs and have the ability to help shape our own at Veeam it’s great to be involved in our IT communities.

Events wise we kicked things off with a trip to Barcelona for Cisco Live and then we got the VMworld (Both US and EMEA) and then finished the year off with both NetApp Insight events with a lot of other events in the middle but these were my picks at the start of the year, and I expect that to follow into 2019 for me also.

We saw GDPR come into play which was a big focus in my post at the beginning of 2018, I think the content that we created at Veeam and the messaging was some of the best messaging in the industry, as we waited, and we documented what we practiced helping our customers understand what could and should be done.

Finally, lots of great customer interaction and feedback. Absolutely love what I do at Veeam and cannot wait to get started in 2019 with some more of it.

I use a few different applications to track and monitor my travel the first one being TripIt I also used this last year and this is basically my centralised console for all my travel, plane journey, hotels, trains, car parking are all stored here. This makes my life easier to make sure I have everything in place for a trip but also allows for our team and extended team to see where in the world we are at one time.

I also use App In the Air and Jet it up.

Although JetItUp had some media over the past month, here is the infographic that provides insight into my travel for the year.

Both TripIt and AppInTheAir are very close on the distance travelled so for the purposes of this to highlight the difference between 2018 and 2017 I am going to use TripIt stats only.

Now some people will look at the below numbers for 2018 and think wow that’s a lot… and apparently that’s in the top 1% of travellers. But this was less than 2017 that you will see next. There was a section of October to December where I had 8 weeks of travel back to back and this was the killer for me, the distance is nothing nor is the time on a plane. But back to back weeks away is the pain. A new year’s resolution is not to exceed 5 weeks back to back. 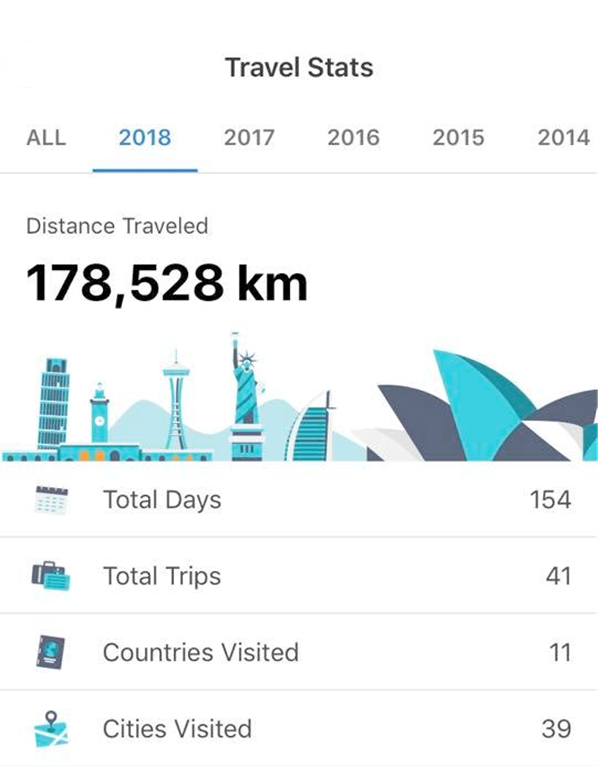 At least I did less distance travelled compared to the 2017 and wonder what 2019 will look like. Although 2018 did see an extra 10 or so days away. 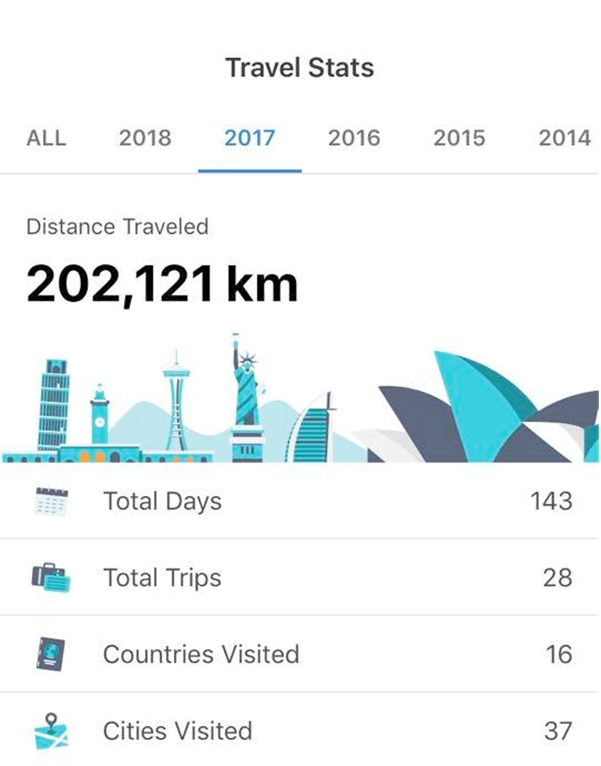 You will see on the previous years that I have linked and shown some steady progression on my blog site and the traffic numbers. I moved over to this WordPress site during 2017.

At the beginning of the year I had a goal of making sure I would get more content out on the site and the first task was a Veeam Replication Series that consisted of 12 or so posts getting deep into the technology.

Veeam Replication 101 and yes it did cover Veeam Replication, but it was covering all forms of replication and why and when you should consider different replication models. For anyone reading this though and want some tips I found that the series writing was by far the most rewarding and watch this space for more things to come from these series.

Some interesting stats come from the native WordPress analytics and where your reader base come from is one of them, not surprising really that the US and UK are number one but some of the other countries I would not have expected that number. 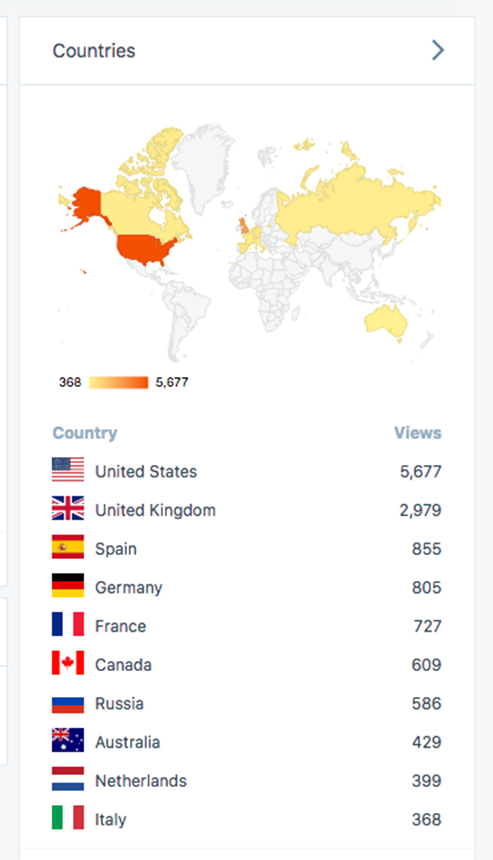 It was May 2017 when I moved over to WordPress judging by this next image. One of things I like from this is the number of views for 2018, I am quite proud to see that every month apart from December and rightly so everyone should be off spending time with their family and friends has had over 1000 views.

Another huge part of the community is twitter for me. Its where I went when I first started in the industry, its where I seeked and found help and assistance and the whole point of blogging was based on giving back to the community.

At a monthly view of twitter, in a world where most probably people are using a different media now to consume their news and seek advice and help on various subjects. Still the growing amount of impressions and mentions and obviously new followers is growing on years gone. 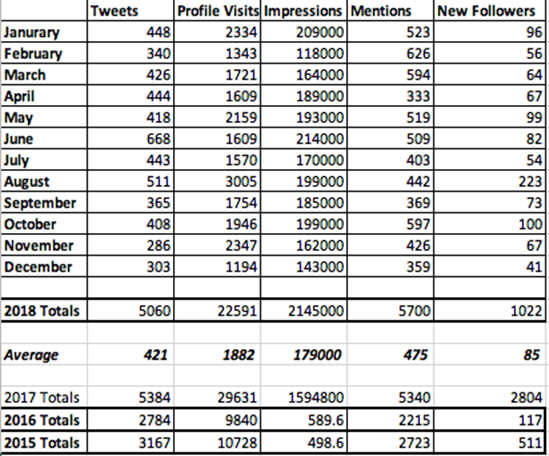 The top tweet for 2018 was this one outlining an outage that Azure had in September of 2018. 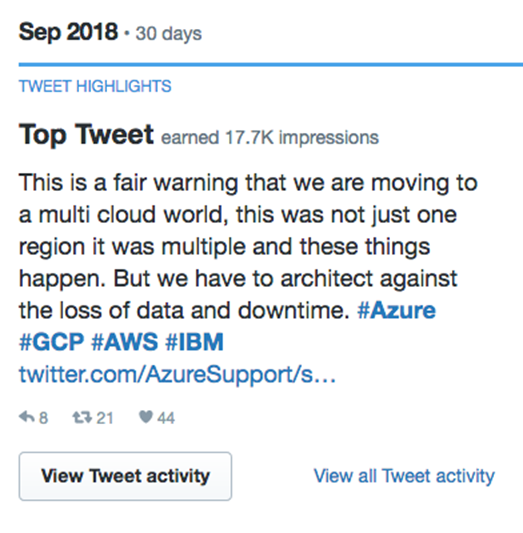 The highlight of my year and I have clearly used some of my mates twitterati to gain this top mention, this was just before our session at VMworld in Las Vegas. Anthony talks about his year and this session over here. 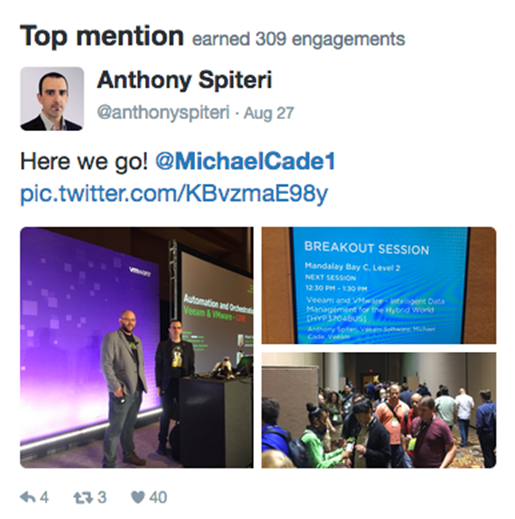 The final tweet to point out is the top media tweet of the year. Quite fitting really as we had a year of GDPR and this one highlighted one of the Veeam features that came around location tagging giving you the ability to tag your physical constructs and objects with a location so that you could report on where your data resides. 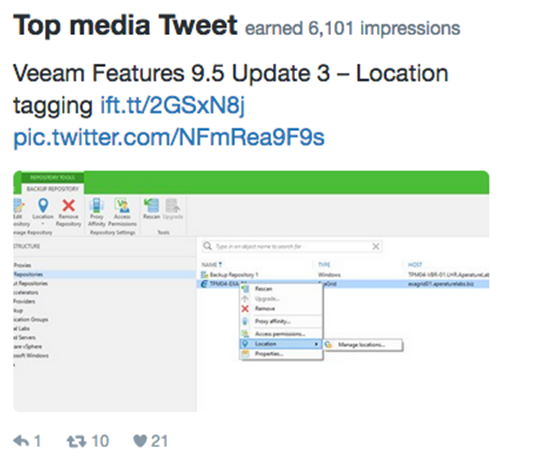 Now I feel like I have just given out awards to my own tweets that’s a little sad. The only thing left to say is thank you, we all write for a reason and that’s to help each other.