Time for a new calendar! Last year went incredibly fast, I think I must be getting old because I remember my parents saying these years are going so fast and I was like not really, I have all the time in the world… oh well now we are saying the same thing.

2019 has been an incredibly busy year for me from a travel perspective and events, some milestones and challenges encountered and conquered but overall a good year, I think.

These sorts of posts are actually for myself to look back on, but it also seems that some people do have some level of interest in what I have been doing but I think over the last three years where this role has taken me to many places, put me on many a stage I feel it’s important to document these so that it may help someone or it will give me something to look back on in years to come.

Let’s start with the travel. I have spent the most amount of time this year of any other years of my life in one of those floating tin cans in the sky. Almost 250,000km done and a stack of other numbers I will show below.

Highlight of the travel, I made it down to Australia. The AWS Summit in Sydney is a monster conference down there and some scheduling conflicts meant that we needed someone from our team down there. I got to visit Sydney and Melbourne in the week I was down there. By far the highlight of the whole year.

Another interesting trip this year came in the form of a team meeting with an overnight train from Zurich to Prague where we were heading to the yearly Veeam Vanguard Summit, that’s a tick in the box for doing it but I will not repeat that experience.

Personally, I don’t mind the travel, the biggest burden is being away from the family. A rule I made this year was to make sure I was home on Friday, which meant leaving on a Thursday night at the latest from the US and when I was travelling east it meant I could leave Friday morning and be home that afternoon. I am going to make another rule which is already going to be broken in the first 3 weeks of 2020 but that is not to travel on the weekend unless it is absolutely necessary.

A sneak peek into my first travel in 2020 is I will be heading out to China for our sales kick off followed by Prague and Atlanta. Really looking forward to China as I have never been. I wonder what else there will be in 2020 to report back on. 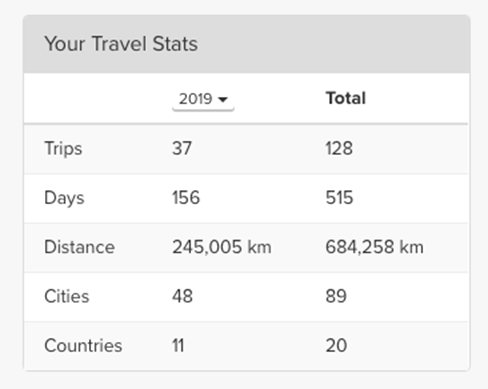 Last year I shared some stats from 2018 and this year I want to do the same, one thing I will say is that I don’t think I have been as active on twitter, is it losing its power? Are we moving to different platforms are most of the interactions that were once on twitter now being done behind closed doors on Microsoft Teams and Slack? I strongly expect so.

A monthly view of twitter, in a world where most probably people are using a different media now to consume their news and seek advice and help on various subjects. Still the growing amount of impressions and mentions and obviously new followers is growing on years gone. 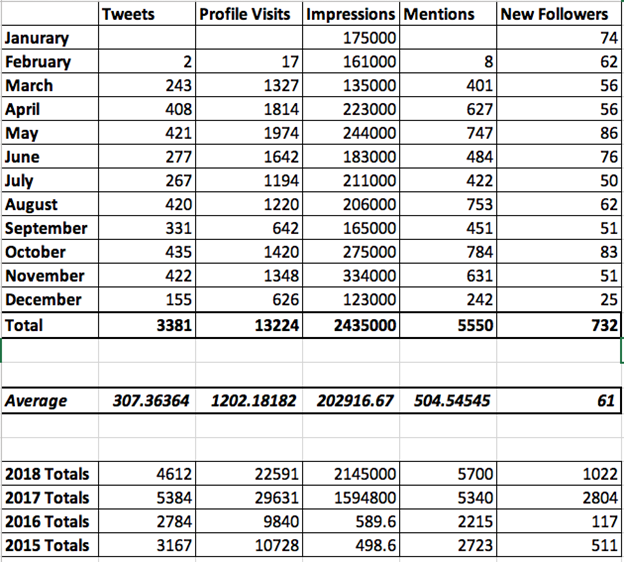 One thing I took from the above was less tweets from me but a staggering amount of impressions on top of the previous years. 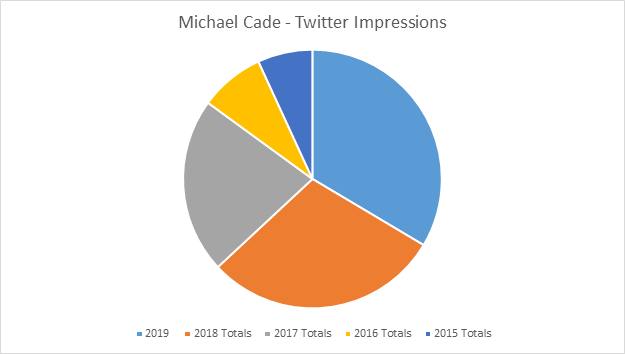 And just a better way of visualising the breakdown over the years I put this together. 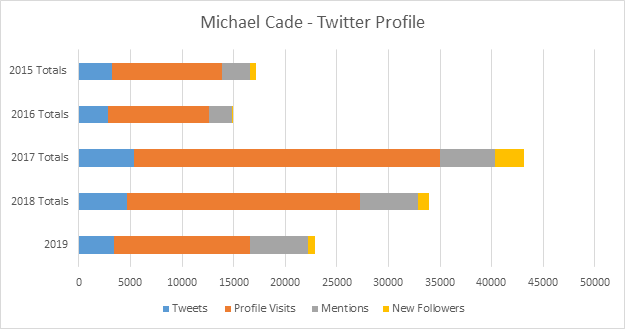 in comparison to last year I am down around 5-6k views and around 3k visitors. I am not really sure why and to be honest that’s not really what it is about. If some of my posts, all of my posts help just one person then it served its purpose. I earn no money from my blog it just costs me the annual fee and hosting I have no sponsors.

I do this because I used and still use today peoples blogs to understand things and do things, it’s a priceless resource for the community and I want it to continue.

One thing I did better in 2018 was kicked off the year with a replication blog that alone probably makes up for the short fall of visitors and views to be honest. It also gave me a good springboard to get a good number of posts out in 2018. I know I probably have another 4-5 posts to add to that total for 2019 but still a few posts behind 2018.

Another thing in 2018 I was pretty proud of was the fact that all months apart from December had over 1k views, not the case this year.

But as I said this is a hobby and its there to help someone. My target for 2020 though will be to focus more on at least one series, I have just completed a series on Veeam Backup for Office 365 but only publishing in December means the real traffic won’t come now till the new year.

Closing out the year, some of the major achievements has to be the promotion to Senior Global Technologist just as we were walking out onto mainstage at VeeamON in Miami, which is probably the second biggest highlight of the year I absolutely love the mainstage live demos that we get to highlight in our team. On a personal note I became an uncle pretty recently so I don’t think that has sunk in yet but my little nephew Reggie and my little brother who has become a father this year should know that I am going to be the best uncle I can be.